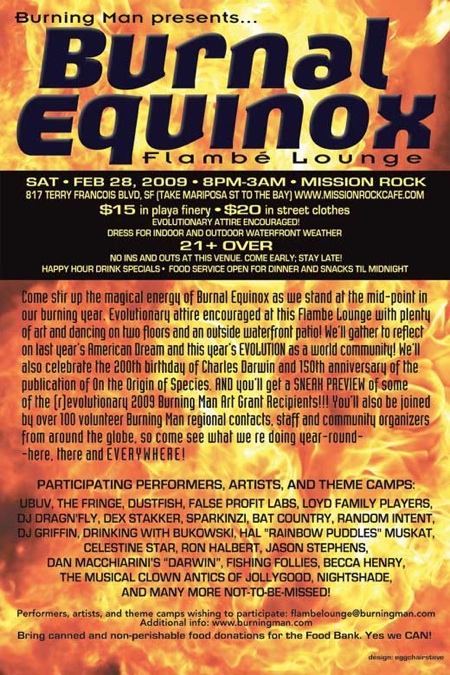 Come stir up the magical energy of Burnal Equinox as we stand at the mid-point in our burning year. Evolutionary attire encouraged at this Flambe Lounge with plenty of art and dancing on two floors and an outside waterfront patio! We’ll gather to reflect on last year’s American Dream and this year’s EVOLUTION as a world community! We’ll also celebrate the 200th birthday of Charles Darwin and 150th anniversary of the publication of On the Origin of Species. AND you’ll get a SNEAK PREVIEW of some of the (r)evolutionary 2009 Burning Man Art Grant Recipients!!! You’ll also be joined by over 100 volunteer Burning Man regional contacts, staff and community organizers from around the globe, so come see what we’re doing year-round–here, there and EVERYWHERE! 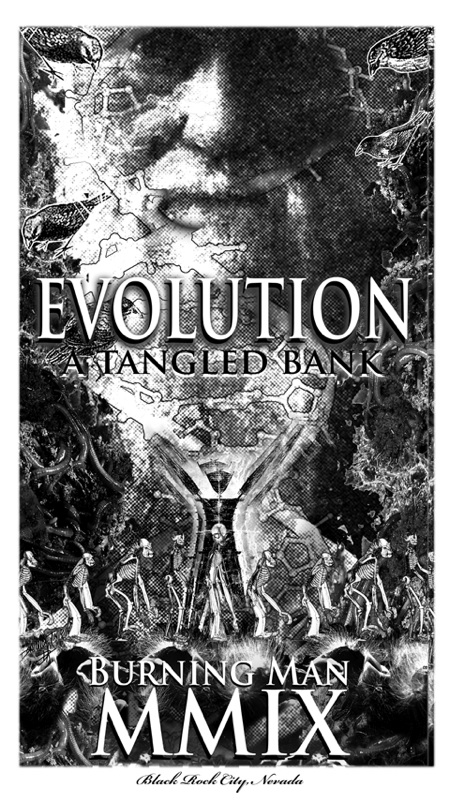 The art theme for Burning Man 2009 is Evolution.

Nature never made a plan, nor does it seem to copy very well. No living thing is ever quite the same as others of its kind. Charles Darwin called this Natural Variation. There is a kind of subtle chaos, a supple element of chance and change, residing at the core of living things. We’ve learned that DNA, the code that programs life, is subject to continual mutation. This enables generations to evolve within a changing world. This year’s art theme contemplates the power and the meaning of the process we call evolution.