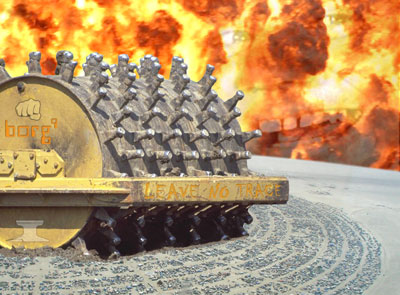 This just in from borg9, “The other white borg”:

borg9 is pleased to announce its art grant for Burning Man 2005, which by unanimous vote, will be awarded to San Francisco’s notorious Seth Maxwell Malice.

The piece, “Rathyatra,” is conceptualized as a giant spiked wheel big enough to roll over more than 50 percent of Black Rock City in one pass, lives up to a fine Burning Man tradition of overweening excess and practical near-impossibility, as well as touching casually and clearly as an afterthought on many themes central to the event’s heart

“The juggernaut is a concept derived from a non-western religion, which I understand these people at Burning Man like,” says artist Seth Maxwell Malice. “As for the psyche, the brain, and consciousness, this year’s Burning Man art theme, well, the brain is one of many organs that will be changed forever by its encounter with this work.

“Also, I’m sure I can line the thing with blinking lights of some sort before it’s all over.”

“This work,” borg9 officials said in announcing there granting of their entire art budget of $500,000 to the piece, “lives up to our dearest hopes for more impactful art on the playa. It will deeply affect every single citizen of Black Rock City. It’s interactivity is severe and inescapable and profound.”