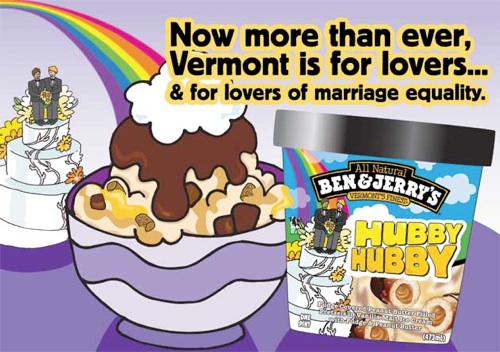 In partnership with Freedom to Marry, Ben & Jerry’s Ice Cream has renamed its “Chubby Hubby” flavor to “Hubby Hubby” in support of gay marriage in Vermont.

Ben & Jerry’s has a long history of commitment to social justice, including gay rights. Its partnership with Freedom to Marry, a national leader in the movement for marriage equality, aims to raise awareness of the importance of marriage equality and to encourage other states to follow the blazing trails of Vermont, Massachusetts, Connecticut, Iowa, and Maine. Freedom to Marry promotes the national conversation about why marriage equality matters and brings together partner organizations into a larger whole – a shared civil rights campaign.