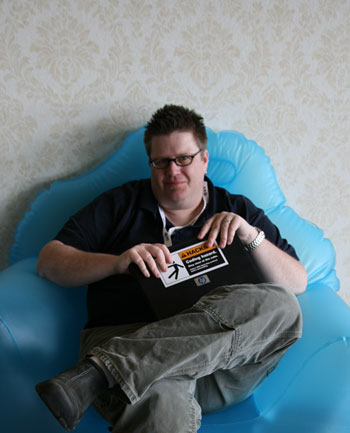 First there was Scoble, then Om, then Gates and now my good friend David Beach is leaving Yahoo! to work for social search startup Wink. I heard a rumor that he was leaving, so I called Beach on his cell phone to confirm the news (as Scoble recommends, always call first before blogging) and Beach told me that he in fact gave notice last week at Yahoo! and will be taking on the position of Director of Product Management at Wink. Congratulations to Beach and to Wink founder/CEO Michael Tanne, who is quite fortunate to be able to add Beach to his team.

Beach had this to say about the move:

I love Yahoo!, it was a difficult decision, but i feel that Wink is doing something very special in the social search space, and I couldn’t turn it down. It’s an indie search engine…like the Sub Pop of search.

Beach has been doing amazing stuff on the web from the very beginning when he was the Art Director for the legendary Internet Underground Music Archive (IUMA), one of the very first influential music websites. In 1995 he co-founded LVL Interactive, an early pioneering web development company, which is where I met Beach, when I worked there from 1997-1998 (Beach is my metaphoric bridge from Web 1.0 to 2.0). LVLi was way ahead of it’s time and produced the online magazine i-STORM as well as developing the first full website for Burning Man in 1996, before it was brought in-house by the Burning Man organization. Since 2001, Beach has worked at Yahoo!, primarily in Yahoo! Shopping where he headed up social commerce application development. Here’s Beach’s personal bio.