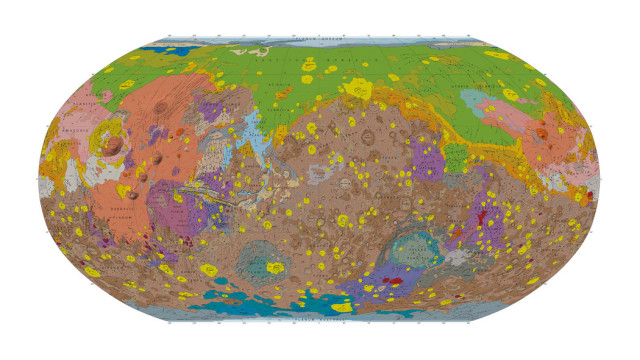 Scientists at the United States Geological Survey have cobbled together an incredibly detailed geologic map of Mars out of the data gathered about the planet since the time of the Viking orbiters in the 1970s. The map “provides a framework for continued scientific investigation” on the planet. The New York Times has more on the map and its uses.

This global geologic map of Mars, which records the distribution of geologic units and landforms on the planet’s surface through time, is based on unprecedented variety, quality, and quantity of remotely sensed data acquired since the Viking Orbiters. These data have provided morphologic, topographic, spectral, thermophysical, radar sounding, and other observations for integration, analysis, and interpretation in support of geologic mapping. In particular, the precise topographic mapping now available has enabled consistent morphologic portrayal of the surface for global mapping (whereas previously used visual-range image bases were less effective, because they combined morphologic and albedo information and, locally, atmospheric haze).