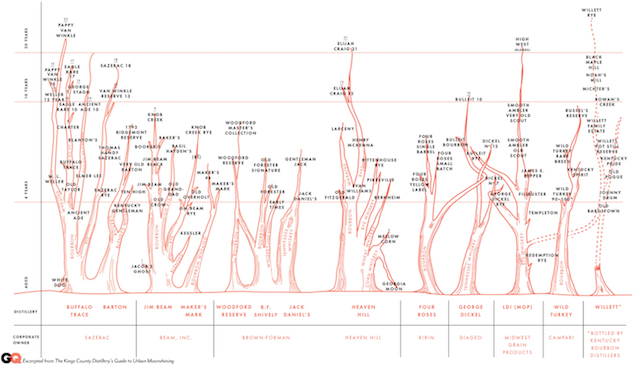 Here’s a larger version of the chart.

Bourbon is the sweet corn whiskey that is the pride of the American South, most particularly Kentucky. GQ Authors Colin Spoelman and David Haskell , taking the lead from “The Kings County Distillery Guide to Urban Moonshining“, created a chart that traces the many brands of bourbons to the (surprisingly) small number of conglomerate distilleries.

This chart shows the major distilleries operating in Kentucky, Tennessee, and Indiana, grouped horizontally by corporate owner, then subdivided by distillery. Each tree shows the type of whiskey made, and the various expressions of each style of whiskey or mash bill, in the case of bourbons. For instance, Basil Hayden‘s is a longer-aged version of Old Grand-Dad, and both are made at the Jim Beam Distillery. Some of this is imprecise. Buffalo Trace has two bourbon mash bills, but it isn’t known which of its many brands are made from each, so this is a rough guess based on online commentary. Willett, formerly only a bottler as Kentucky Bourbon Distillers, has been distilling its own product for about a year; I include the brands that it bottles from other sources for reference. The ages are taken from published age statements if they exist; if they don’t, brands have been plotted in the general area where I would guess they belong.

The Kings County Distillery Guide to Urban Moonshining is available on Amazon.