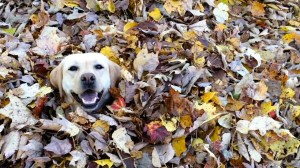 A silly yellow Lab named Stella kept up her yearly tradition of repeatedly chasing her beloved ball right into a pile of crisp, freshly raked autumn leaves. Stella’s human Jody Hartman humorously stated “It’s that time of year again. Leaves are on the ground, and Stella is… in them.” 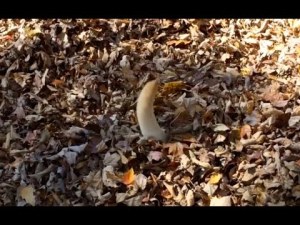 Stella, a very lively yellow Labrador Retriever about whose silly antics we’ve previously written, repeatedly dives into a pile of crisp autumn leaves in order to retrieve her beloved tennis ball. According to Stella’s human Jody Hartman, “Nothing gets between Stella and her ball”. 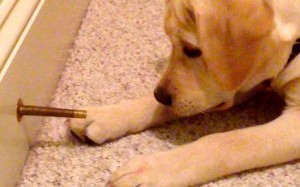 Springy doorstops have long been a fascination for domestic animals, and 1-year old Stella the yellow lab is certainly no exception. According to her human Jody Hartman, Stella is easily entertained by the doorstop, stalking and attacking it with the voracity and energy of a puppy. 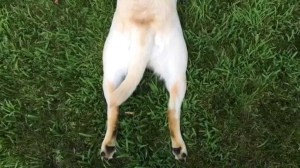 A beautiful and healthy yellow lab named Stella puts on the brakes when she’s hot and tired by letting her back legs drag while her front legs keep going. Stella’s human, Jody Hartman says, quite appropriately, that “She wants to keep going. Her hind legs have other plans.”