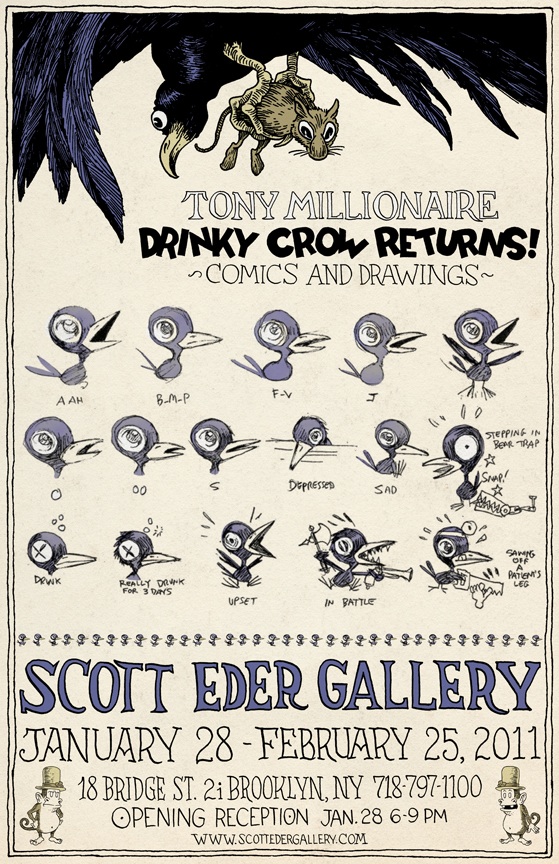 Tony’s first cartoons — Maakies — were published in The New York Press (1994) and since then his work has graced the pages of The Village Voice, The New York Times, The New Yorker, Seattle’s The Stranger, Dave Eggers’ Believer and many other alternative weeklies. His other projects include an animated series featuring his characters on the Cartoon Network’s Adult Swim with “The Drinky Crow Show,” and other animation projects on Saturday Night Live.

In addition to his weekly comic strip, Tony continues to produce his comics and graphic novels featuring Sock Monkey (Dark Horse Comics), and Billy Hazelnuts (Fantagraphics Books) and has created cover art for Elvis Costello’s albums National Ransom and Secret, Profane and Sugarcane. He has been nominated for and won numerous Eisner and Harvey award for his comic book contributions.

Tony’s artistic style incorporates the elegant forms of 19th and 20th century illustration with the bombast of underground cartooning of the 1960’s and 70’s. Highly detailed sea and landscapes coax the viewer into reveries that feel like folk tales spiked with intermittent doses of surrealism, Borscht Belt humor (complete with drum rolls and rim shots) and street corner prophesying. The cartoon animals, people, grotesques and cherubic demons that populate these stories move in an undertow of everyday events peppered with humor, wanting and loss, shocking violence, and stark lessons that mirror today’s world.