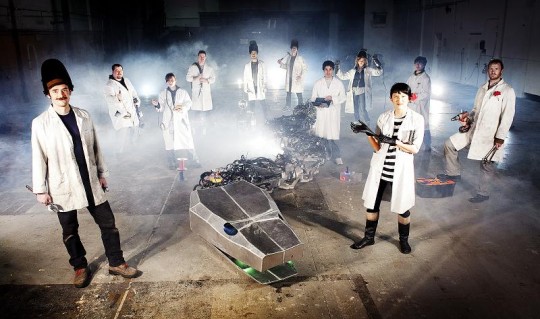 Titanoboa by Charlie Brinson is a 50 foot long electromechanical kinetic sculpture of a snake. The sculpture is based on a prehistoric giant snake of the same name. Titanoboa is under construction at Canadian art lab eatART (see the partially completed snake in action). The completed sculpture will be amphibious and able to transport passengers and a driver. eatART is accepting donations for completion of Titanoboa.

60 million years ago in the sweltering heat of a climate 6 to 8 degrees warmer than today lived a monstrous snake called Titanoboa. It was only at these warmer temperatures which are at the upper end of climate change predictions that the cold blooded beast was able to reach these sizes. Today, as fossilized life is exhumed and burned relentlessly to fuel modern progress, primordial spirits have been stirring. This fossil beast has been brought back to life as a provocative omen on the eve of catastrophe.