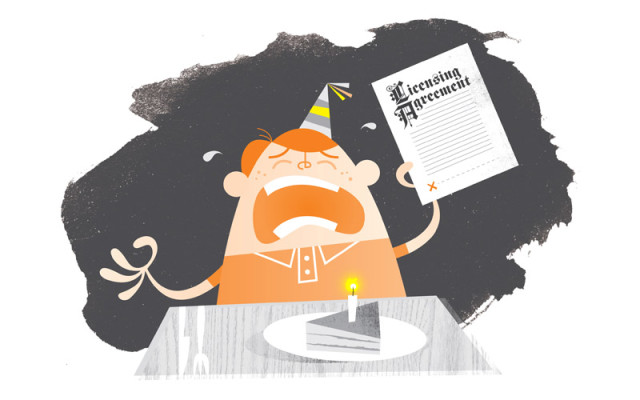 Everyone knows the song “Happy Birthday to You“–the Guinness Book of World Records says it’s the most recognized song in English. Most of us sing it several times a year, for free. So it may surprise you that Warner Chappel music owns the rights to the song and charges thousands of dollars for its use in public. They make $2 million a year in royalties from TV shows and filmmakers. But now WFMU and the Free Music Archive are trying to set birthdays to music anew, for free.

The Birthday Song Contest seeks a few new Happy Birthday songs that are simple and catchy, with great earworm potential that can be sung in restaurants, bowling alleys, and even in TV shows and movies – free of charge.

It’s a great way to say Happy Tenth Birthday to Creative Commons. Songwriters can add their new birthday ditties to a national repository of alternate Birthday songs. Submissions are licensed under Creative Commons Attribution license. The deadline for submitting songs is Jan 13 at 11:59pm ET. The judges include Lawrence Lessig, Jonathan Coulton, and members of Deerhoof and Yo La Tengo. They will select 3 winners to be announced on 1/29/2013.

The song was originally written in 1893 by two sisters, but wasn’t copyrighted until 1935. If you want to go academically deep on its copyright history, check this paper. The video below highlights replacement birthday songs used on TV and film over the years as they try to save a few thousand bucks by not singing the song that everyone knows.

Happy Birthday Alternatives in Film and Television from Free Music Archive on Vimeo.