The Culinary Adventures of Baron Ambrosia is a new and wonderfully eclectic Cooking Channel show hosted by Chef Baron Ambrosia ( Justin Fornal) that premiered June 1, 2012. You may recall that, in 2009, John Law wrote about Baron and his show Bronx Flavor on Laughing Squid. John, a friend of Baron’s, will be appearing in an episode of Culinary Adventures. Phat Man Dee and filmmaker John Waters will appear on the show too, in the episode “The Stomach Rumble of Baltimore, MD”, which premieres Friday, June 22, 2012 at 10 PM EST.

Baron continues to take culinary consciousness to a whole new level. His discerning palate and passion for flavor lead him on cross-country adventures, revealing America’s unsung heroes of culinary excellence. Along the way, the Baron finds himself tangled in stories of mystery, comedy and intrigue.

Michael Leaverton of SF Weekly recently reviewed the show and had this to say:

…Baron’s WTF stems from his bravura persona as an devilish, heel-spinning, arm-waving, lady-killing, pimp-clothes-wearing incorrigible culinary adventurer — all he’s missing is a sword and a bag of mushrooms — who reworks a simple, familiar concept for a food show — visiting a couple ethnic restaurants per episode — into adventure mini-films that cast restauranteurs, by force, into bit players. It’s really weird. He makes Alton Brown look like a 10-year-old with his camera-in-the-refrigerator gimmick.

It’s almost an affront that Baron actually pulls the whole thing off. Concept food-shows this strange shouldn’t even be attempted. And he nails it because he is, at root level, a cool man. Not cooking-show cool — that’s Anthony Bourdain with his embarrassed Ramones shirt — but, oh, I don’t know, street-art cool?… 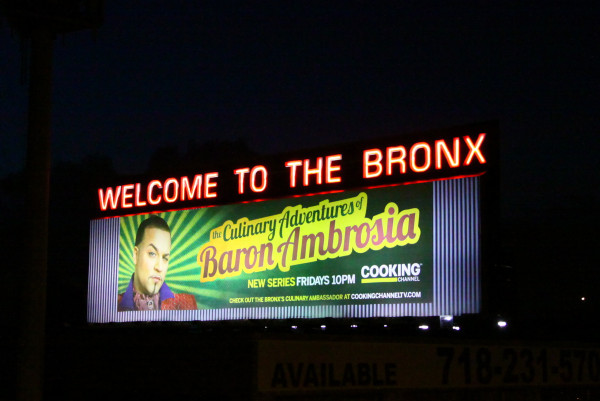 View from Triborough Bridge. The lights are on and the Bronx is open!