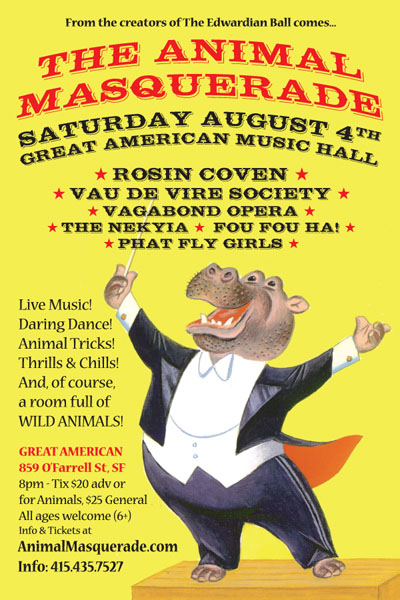 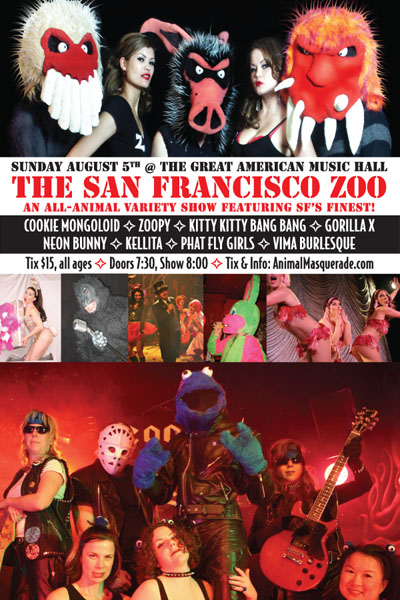 The animals are taking over San Francisco! The folks behind The Edwardian Ball are presenting two fabulous back-to-back animal events at the Great American Music Hall this weekend, starting with The Animal Masquerade on Saturday, August 4th, followed by The San Francisco Zoo on Sunday, August 5th.

From the jungles of Africa to the farms of Berkeley, a menagerie of winged, furry and fanged friends descend upon SFâ€™s most elegant venue for an entire weekend!

From the creators of The Edwardian Ball, San Francisco’s most beloved, theatrical, costume gala, comes a new creation of wild proportions – The Animal Masquerade. Rosin Coven and Vau de Vire Society, co-hosts of this primal soiree, present new music, theatrical works, choreography, and tall tales in an elegant dancehall setting. As one might imagine, this one-of-a-kind night raises a bevy of questions: What happens when the dainty darlings of civilization encounter the wild? What happens when feral creatures are captured for our entertainment? What goes on when the cages are opened and night falls upon the zoo? Will the dancing hippo find glory? Will the cruel zookeeper get his just desserts? Thereâ€™s only one way to find outâ€¦.info and tickets at www.animalmasquerade.com. Also featuring Gypsy Klezmer Cabaret by the fabulous Vagabond Opera from Portland, Oregon. $20 advance or for animals, $25 at the door general admission, all ages 6+. Flock to it!