If you’ve ever hung out with our friend Chris Hackett — arch-provocateur of the Madagascar Institute, the Brooklyn art combine behind the Jet Ponies and many other delightful and dangerous projects — you’ve probably got some really cool scars.

Now, thanks to the magic of TV, you can spend time with Hackett AND keep your limbs intact. “Stuck With Hackett” premieres tonight at 10 p.m. on the Science Channel. The show follows our favorite anti-hero as he gets dumped in the desert and re-engineers junkyard flotsam into an air conditioner. Hackett “melts bullets, explodes a solar chimney, and assembles a propane-powered flamethrower in an effort to beat the heat,” according to the show’s website.

We’d expect nothing less. This, after all, is the man who co-built a very noisy blender using a pulse-jet engine and a garbage can…and then used it to make big batches of sweet, delicious fruit smoothies. 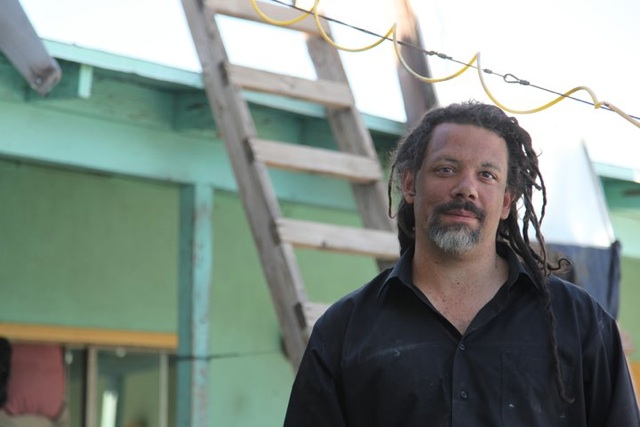 A dangerously curious engineer, Hackett takes on an engineering/survival adventure each week as he’s stranded far from modern luxuries with just the basics of food, water and shelter. He doesn’t eat bugs for survival, and he doesn’t dig a hole in which to sleep. Rather Hackett shows true gumption and tenacity as he thrives in each and every adventure. Stuck in an abandoned gas station? No problem! Hackett can build a beacon out of the car radio. Need to stay cool in a small shelter in the desert? Don’t worry, by using existing vents, a found battery, and some old parts Hackett builds a makeshift A/C unit. He transmutes base material into mechanical gold because this is what he does – it’s what he’s compelled to do. Nobody wants to be voted off this island!

For the latest updates on the show, check out the Stuck With Hackett Facebook page.