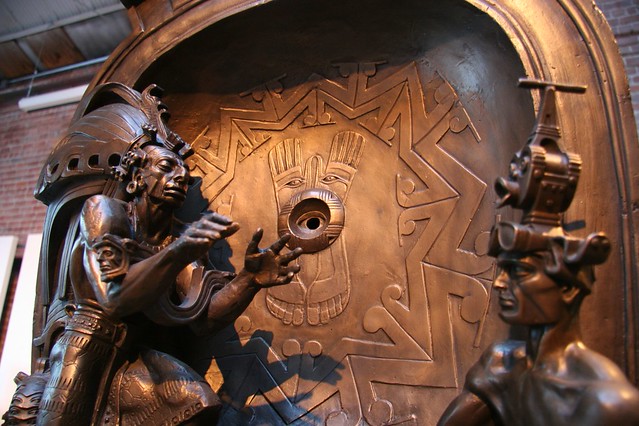 Varnish Fine Art currently has show up featuring the amazing works of Polish sculptor Stanislav Szukalski (the show, entitled “The Self-Born: Stanislav Szukalski”, runs through September 16th). This is the first large-scale exhibition of his work in 5 years and features many of his sculptures, drawings and photographs. Some of the pieces look like a cross between the Industrial Revolution and the Aztec Empire, and are really stunning. Last Friday I shot some photos of the Stanislav Szukalski show which was up during the Hi Fructose Release Party. There will be an opening reception on Saturday, July 30th, from 7-11pm and you can also stop by and see the show at any time during normal gallery hours.

Szukalski’s bronze sculpture bridged burgeoning 20th century art movements only to fall into obscurity until the efforts of Glenn Bray, Lena Zwalve, Decker Studios, George DiCaprio and his son Leonardo DiCaprio reawakened interest. His work has been called “bent classicism.” Szukalski was perhaps a narcissist of the highest order, as he considered himself “without antecedent or influences,” while managing, according to his admirers, to fuse the movement and energy of Futurism, the emotion of Impressionism and the geometric configurations of Cubism into a single poetic form. He is quoted as saying, “I put Rodin in one pocket, Michelangelo in the other and I walk towards the sun.”

Last Gasp has published three books on Stanislav Szukalski (“Behold! The Protong”, “Szukalski: Inner Portraits” and “Struggle: The Art of Szukalski”), all of which will be available at the opening on July 30th.