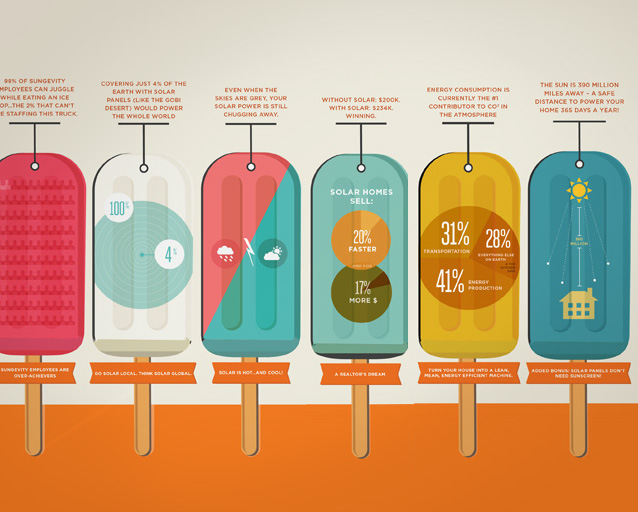 Getting off the grid is now made delicious and fun with the beautiful infographic-ladened solar-paneled truck by Sungevity. One of the Forking Tasty brothers, Jason Anello of Manifold, collaborated with designer Kelli Anderson to create the fabulous Solar Ice Pop Truck for their Oakland-based home solar systems client, Sungevity. By handing out free all natural and organic frozen pops, made by Austin-based company Good Pops, Sungevity is sure to get a few willing ears to listen to their ideas on how easy it is to make a home solar-powered.

This solar ice pop truck cools you off and educates you about solar energy at the same time. Belly up to the counter to get your iQuote started while you enjoy a Mango ice pop. Perhaps cold brewed coffee is your preference. As you caffeinate you’ll learn amazing and simple info about how easy it is to convert your house to solar power.

Sungevity’s truck (a former mail truck) recently rolled into the streets of New York City in July 2011 where it fed the masses free ice pops and educated them about solar power. Watch in this video as the truck’s solar panels rise open to get ready to hand out free ice pops!

Jason had a chop shop change the shape of the front, drop the entire truck down a few inches, and outfit it with solar power. He also added “leveling” hydraulics to avoid the truck-tilt caused by the convex banking streets (a phenomenon that imbues the onlooker with a sense of psychological dread tantamount to being on the leaning side of a Richard Serra.) A press of the keyfob ceremoniously erects the solar panels and serving windows in a slow, majestic sort of levitation/transformation—much like the batmobile (or one of those -mobiles.)

The truck is on the move down the East coast and they’ve made tracking its next stop simple. Additional information and photos are available from the blogs of Sungevity, Jason Anhello and Kelli Henderson.