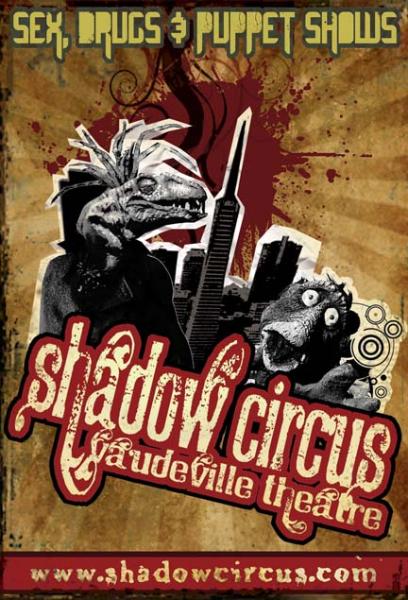 Shadow Circus Vaudeville Theatre, San Francisco’s most belligerent puppetry troupe will be performing this Wednesday, April 15th at Climate Theater in San Francisco and this Saturday, April 18th at The Stork Club in Oakland.

When Wesley realizes that his life has been an utter failure, he tries to improve his outlook using the popular self-help book ‘The Secret’. Will Wesley be able to turn his life around with the power of ‘The Secret’, or will his supposed friend Hatchet the Velociraptor just use it as another tool to torment him with? A full night of music, magic & monsters!

Combining folklore, mythology, Lovecraftian monsters and pop-cultur parody, Shadow Circus Creature Theatre has been one of San Francisco’s most popular and outrageous puppetry troupes since it’s formation in 2000. Using life-sized latex and foam creatures Shadow Circus creates a world that is utterly fantastic, and yet hilariously similar to our own.