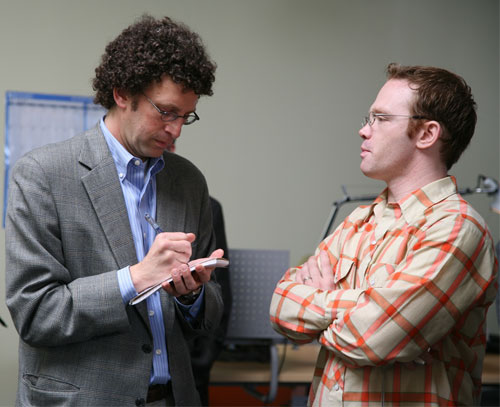 In today’s Sunday edition of the San Francisco Chronicle there is an article by Dan Fost on how new internet companies are returning to the South Park area of San Francisco, which over a decade ago was called “Multimedia Gulch” and was ground zero for much of the early days of the web, being the home to Wired Magazine/HotWired, Organic, etc.

“Web 2.0 has a local address
South Park, the neighborhood that fostered the dot-com boom, is back”

There is a look to the South Park crowd: rectangular glasses, ironic T-shirts and hipster shoes that almost look like bowling shoes but are more likely Skechers for men or, for women, Campers or Fluevogs. The most popular shirt is from Mule Design, which discovered that the squid biomass on Earth is greater than the human biomass. The shirt declares simply, “Welcome Squid Overlords”.

I met Dan at SXSW where he was working on his SXSW article at the FUDY Party and I was telling him how it was amazing to me how many of these new companies, like Technorati and Odeo, were all locating their headquarters in South Park (I worked in the South Park area from 1993-1997 during the first boom). At the party I introduced him to Jonathan Grubb of Rubyred Labs and as a result of their meeting, Dan paid a visit to one of Rubyred’s Monday morning Cereal Bar events. He was there doing research on today’s article, which inlcudes a quote from me regarding how parking in South Park has changed through the years, a sign of how the neighborhood has been in transition.