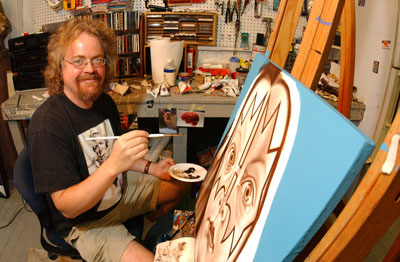 Ron English is widely considered to be one of the seminal figures in the ever-growing culture jamming movement. He has pirated over a thousand billboards over the last twenty years, replacing existing advertisements with his own hand-painted “subvertisements.” Ron is also a well-known Pop painter, whose work has been exhibited in galleries and museums worldwide, including the Museum of Contemporary Art in Paris and the Whitney Museum in New York. This is a comprehensive survey of his art, covering 20 years of his career, from staged photography to neo-surrealist oil paintings, from street art to culture jamming. An important look at the work of an artist who has been at the forefront of movements in photography, painting, activist art, and underground music.

Pedro Carvajal’s documentary “Popaganda: The Art and Subversion of Ron English”, which was recently featured in the San Francisco Documentary Festival, will be shown at Varnish on June 11th at 8pm. A book by the same name, was published by Last Gasp in 2004.

UPDATE 1: Here are my photos from the May 28th preview party.

UPDATE 2: Thomas Hawk has a great write-up of the opening including photos (if they load slow, try his Flickr set).