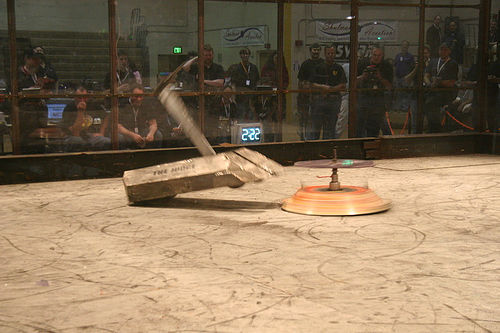 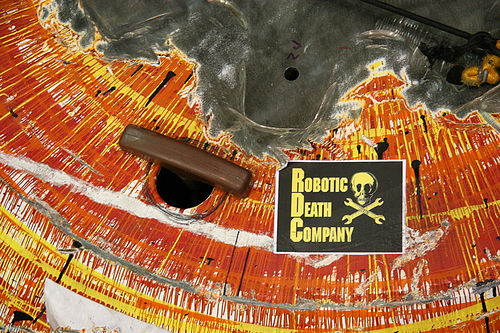 RoboGames, the largest robot competition in the US, returns this weekend for 3 action-packed days at Fort Mason in San Francisco. Here is the full list of events and more info, including how to buy tickets, can be found on the RoboGames website.

This is a really amazing event, produced by my good friends David Calkins and Simone Davalos, along with an awesome crew of volunteers. I can’t recommend it enough and if you are in San Francisco this weekend, you should really try to check it out. Here are my photos from the 2005 and 2004 RoboGames.

Started in 2004 as ROBOlympics, the third annual RoboGames brings robot builders from 20 countries to California to compete in over 50 events. Combat Robots (made famous by years of television), are a cornerstone of the international competition – but are joined by walking androids, human exo-skeletons, soccer bots, and much more. Fire-breathing, 340 pound behemoths as big as motorcycles crash into each other and the bullet-proof glass walls separating them from the audience.

Robotics expert and tournament organizer David Calkins has added hot new categories for 2006. As robot abilities evolve, so do the contests, which now include fire fighting, triathlons, solving mazes, balancing and obstacles, hockey, soccer, and robomagellan â€” autonomous outdoor navigation over different types of terrain. The ArtBot categories have also expanded to include contests for robot bartenders and painters.

And if hot, competitive robot action is not enough to get you off, the Stormtroopers from the Golden Gate Garrison of the 501st Stormtrooper Legion are planning on making a return appearance.

UPDATE: My photos from RoboGames 2006 are now online.