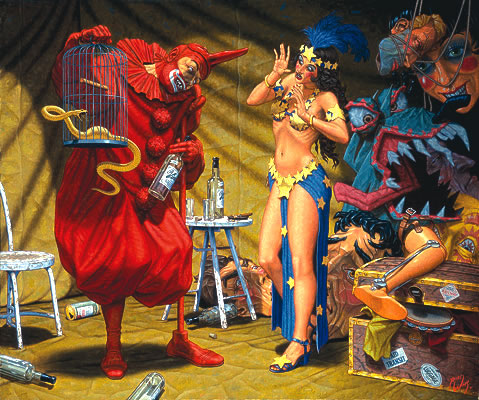 painting “In The Pavilion of The Red Clown” by Robert Williams

Robert Williams, infamous lowbrow painter and founder of Juxtapoz Magazine, is currently touring the West Cost in conjunction with his new book “Through Prehensile Eyes: Seeing the Art of Robert Williams”, which is published by Last Gasp and features his 58 most recent paintings.

Through Prehensile Eyes is a collection of Robert Williams’ most recent fifty-eight paintings from his past three shows at the Tony Shafrazi Gallery in New York. The images range from Williams’ familiar lowbrow and biker culture, stretching deep into a faux science of quantum mechanics leaving the viewer in a world of scientific mindplay. Robert Williams sprang from the custom car culture of Southern California and was one of the original Zap Comix artists. He transcended the constraints of both, mastering oils and forging a career as the preeminent artist among a generation of imagist painters. After singlehandedly becoming the model of Lowbrow art, Williams has now penetrated the inner sanctum of the fine arts movement. Hardbound, color.