A baby pygmy hippopotamus who was born on Boxing Day (December 26, 2014) is thriving under the care and tutelage of his keepers at the ZSL Whipsnade Zoo near Dunstable in Bedforshire, England. The calf was born to Flora, his 28-year-old mother, who is currently battling cancer.

Keepers at ZSL Whipsnade Zoo had a late Christmas present when Flora the pygmy hippo gave birth to a much-needed boy on Boxing Day. The Zoo’s keepers say they are especially proud of the baby’s mum, 28-year-old Flora, who has been battling cancer. Flora was featured in ITV’s documentary series ‘The Zoo’ last year, and although she is still living with a tumour in her mouth, vets say she has responded fantastically well to the treatment and the cancer did not affect her pregnancy at all. …after a six hour labour, the calf was born, a 7 kilo, perfect miniature of his mum. Since then, the baby hippo has been happily waddling around and seems to love spending time in water. On his first weigh-in, he was so slippery it was like picking up a big bar of soap!

The birth of this hippo is important to the existence of the species, which is considered to be endangered.

Pygmy hippos (Choeropsis liberiensis) are classified as Endangered by the IUCN Red List of Threatened Species, and teams at international conservation charity ZSL are working in Liberia and Sierra Leone to research and protect the species. 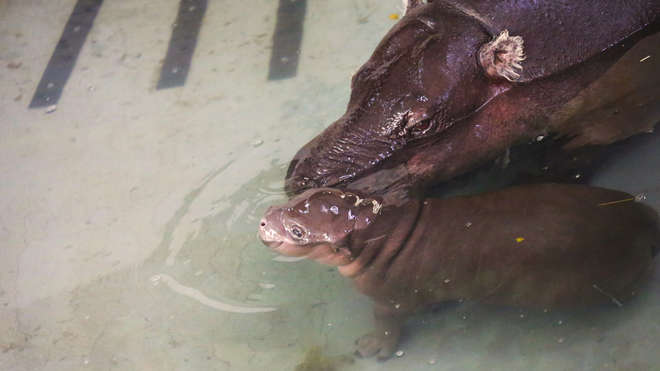