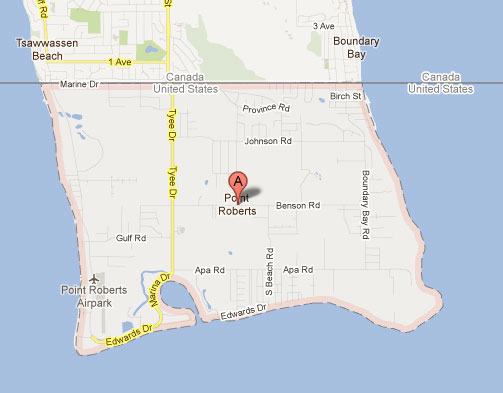 Point Roberts is a small town in northern Washington that is on a peninsula that connects only with Canada—a geopolitical oddity known as an exclave (Alaska is a large scale example). For an American to reach Point Roberts by land, they must cross the border twice. Point Roberts was the subject of a recent article by Nate Berg of The Atlantic Cities.

Point Roberts is also a good place to get away – or to hide out. Thanks to Canada’s fairly strict border crossing rules, it’s difficult for people with criminal records to cross over, so even ex-felons who can move freely about in the U.S. wouldn’t easily be able to find their way into Point Roberts. This is part of the reason the town is, unofficially, home to about 50 people in the U.S. Marshals Service’s Witness Security Program, or Witness Protection.

via The Atlantic Cities