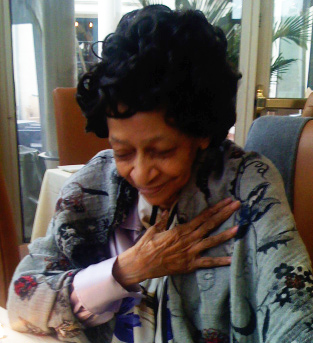 Today the Internet Archive announced they will soon be receiving a comprehensive video collection of 35 years of U.S. television news—a bonanza for their ongoing effort to archive all television news since the advent of television. The video collection comes not from an institution or company, but a private individual, librarian and activist Marion Stokes, who single-handedly and continuously recorded the news from 1977 until her death at age 83 in 2012. Driven by a desire to preserve the news, Stokes recorded national and local news (in Boston and later, Philadelphia) with an array of TVs and VCRs in her home. She built her daily routine around the project, feeding her VCRs with fresh tapes at regular intervals each day.

In the end she amassed an astonishing 144,000 VHS tapes, enough to fill 4 large shipping containers. In the coming days the collection will embark on a journey from Philadelphia to the Internet Archive’s storage facility in the San Francisco Bay Area. The Archive will then begin the time-consuming task of digitizing the tapes. For more on Marion Stokes and her remarkable collection, see this Fast Company article.