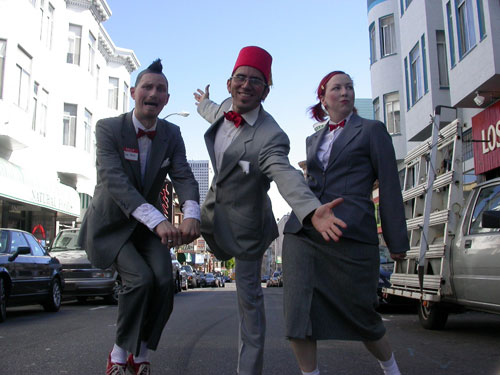 Time to break out that two-sizes-too-small gray suit and red bow time, The third annual Paul Reubens’ Day takes place next week on Saturday, July 23rd in San Francisco. PRD will unfold in three phases: first a Paul Reubens procession/pub crawl, followed by a benefit for the The Center for Sex and Culture and finally ending up at Midnight Mass with Peaches Christ. Check out Pee-wees Tribe for PRD planning discussions, and Pee-wee Herman resources.

The “Drunken Redheaded Sluts”, in conjunction with the Center for Sex and Culture (CSC) and Midnight Mass with Peaches Christ, will once again host Paul Reubens’ Day (PRD), which will be celebrated for the third year in a row this July. PRD is a playful and naughty tribute to the unique work of actor Paul Reubens (Pee-wee Herman), as well as a public spectacle supporting sexual expression. In the tradition of the Cacophony Society, whose costume-focused events include Santarchy and the Urban Iditarod, PRD is a madcap trek through a different neighborhood each year, with stops and impromptu performances in local pubs, toy stores and parks. Participants deck out in Pee-wee related costumes, adopt the voice and mannerisms of the former children’s TV star, and delight the public with their impersonations, masse renditions of the “Tequila Dance,” and sly adult humor. Hollywood reports that Mr. Reubens is currently working on two new Pee-wee movies, while in Northern California, all aspects of his legacy will be lauded on July 23, 2005, the first Paul Reubens’ Day to boast three Pee-wee events.