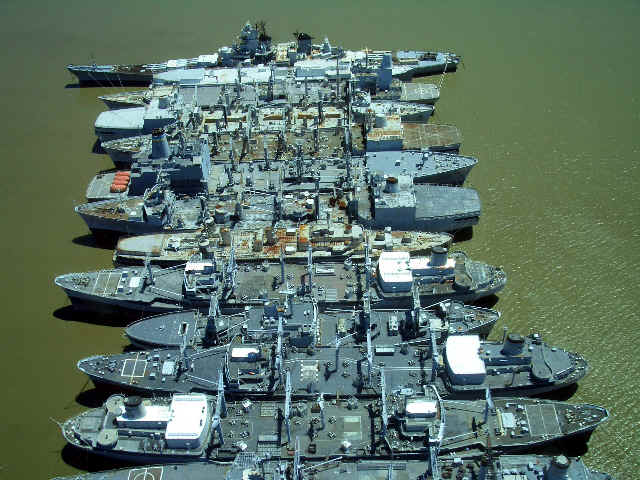 My friends Max and Josh Hunter at Western Dovetail have an amazing view of one of the most interesting events occurring in the Bay Area for the next several months. Max launched the new Drydock Blog sharing their unique vantage point on this amazing project with the world via a webcam on the second floor of their manufacturing facility on Mare Island.

The Suisuin Bay Naval Reserve Fleet as the Federal Government calls it (they get a little huffy when someone refers to it as the Mothball Fleet) is now being removed one ship at a time after an ecological assessment by DARRP and years of handwringing by various other government agencies, environmental groups and the like. Many of the ships will make their first port in decades after their being towed from their off shore location in the outermost reaches of the Bay Area, Suisun Bay to be exact. Some of the ships will then pull into the massive and still functional dry docks on Mare Island.

There are two other locations in the US where the Feds stored the nations no longer necessary naval warhorses in the years after the end of WWII. One is in Newport News, Virginia and the other, in the Neches River near Beaumont Texas.

At least two major Hollywood movies have used the Suisun Bay fleet as a backdrop/set for action sequences. Clint Eastwood’s Dirty Harry Callahan sequel Magnum Force has Callahan blowing away a secret cabal of vigilante cops on the ghost ships and a limping, cane wielding James Caan avenges himself against the trecherous Robert Duvall on the ship during a wild finale in Sam Peckinpah’s Killer Elite.

Over the years, many people have dodged security to dock on and explore the fleets ghostly, abandoned ships. The San Francisco Suicide Club canoed out on Christmas Eve 1977 dressed as Pirates, nearly capsizing several of the 8 canoes in this ill advised expediton. The Club returned the following year only using inflatable rafts rather than canoes.

Here’s the arrival of the SS Solon Turman.