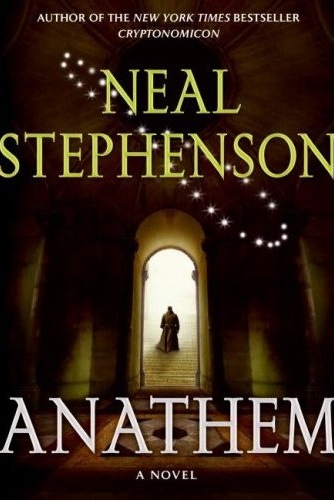 Today The Long Now Foundation announced it will be hosting the launch party for Neal Stephenson‘s new novel Anathem in San Francisco this fall. The event is scheduled for the 9th of September 02008 (see here for more on 5-digit dates. The venue has not yet been announced, but there is a webpage and a mailing list about the event.

Here’s an excerpt from the Long Now blog post by the Foundation’s director, Alexander Rose:

I recently finished reading the review copy that Neal sent. The book pulled me in immediately, and I ended up reading the nearly 1000-page tome in just a few days. Set in a genre bending alt-future-retro world where mechani-punk technology meets space opera in a blend of the best of Snow Crash and The Baroque Cycle.

The Long Now Foundation will be hosting the book launch event in San Francisco on the evening of September 9th. The evening will include a reading by Stephenson, Q&A with Danny Hillis, and a small concert of the original music inspired by the book. Signed copies of the book will also be available.

Anathem’s story features a society of long-term thinkers. This is consistent with the Long Now’s mission to “foster long-term thinking”. While the novel is not based literally on the Long Now’s work there is a direct connection. The inspiration for the novel stems from a request that Long Now founder Danny Hillis made in 01999 of Stephenson and several others, to share their ideas for what a Millennium Clock would look like. These early sketches and ideas from Neal and others are on the Long Now site. Years later, Neal picked up these notes again and they started him on the road to this novel.

Neal Stephenson‘s novels include the groudbreaking Snowcrash, Diamond Age, Cryptonomicon and his most recent work the 3-book project The Baroque Cycle— the last installment of which System of the World was released in 2005. He is a charter member of the Long Now Foundation.

Anathem is now available for pre-order on Amazon.