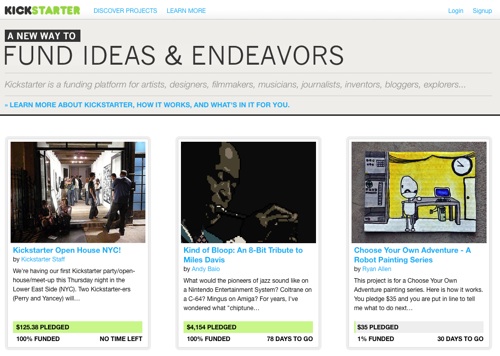 At the most basic, Kickstarter is website that helps creative types to pitch a neat idea publicly and receive funding support for their ideas, but it is more than just a mouthpiece to ask for money. The funding is all or nothing, which means that a project that raises anything less than 100% of its goal receives nothing. This means that any money transfered will go to producing something, and your donation will not be in vain.

One of these projects is from Goopymart, who makes awesome art. Hi folks! My name is Will and I am the artist behind Goopymart. Chimples is a character I developed due to my constant habit of drawing monkeys. I thought, “I might as well make a character!”, and so here he is…

I’m proposing to design and produce a Chimples plush toy along with a Chimples book containing comics and art which would be done later in the fall. Over the next few months I will update everyone on the toy/book design progress with blog posts and pictures!

Most of the cost will be for prototype and manufacture of the toy, as well as book printing and ordering from blurb, amazon payments fees, and book/toy shipping and handling. also storage or using amazon fulfillment for toy sales after all pledges are with their purchases…

Also, because it is donation based rather than investment, Kickstarter is protects the artists from predatory investors. This is great because the only way to create something often is to sell it, and Kickstarter helps artists actually retain their art. Their FAQ covers all these details and more.