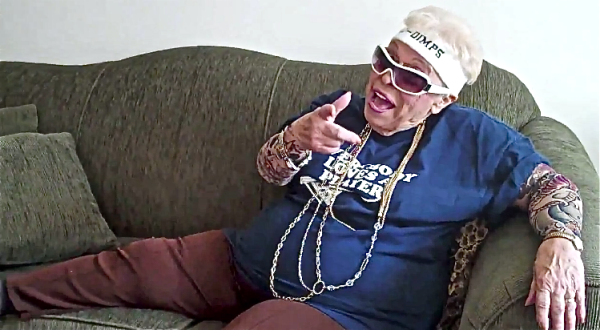 Staten Island-based Josephine Lamberti (aka Josie Dimples or “J-Dimps”) is having a lot of fun making videos with the help of her grandson Donny Brandefine. He’s been teaching his sassy 80-year-old grandmother internet skills and has been filming her for a couple of years running. The New York Times City Room recently featured her and is reporting that she is an “Internet sensation” and has caught the attention of several celebrities through her Twitter account. Dimples says on Twitter, “I want 80K followers (or 1 million) before I die”. She has just over 76,000 followers as of this writing.

Because of his grandmother’s smile, he gave her the nickname Josie Dimples — J-Dimps, for short — and began making videos of her as a wisecracking grandma with a secret penchant for “Jersey Shore”-style, fist-pumping dance moves.

…Other celebrity Twitter users who have retweeted or corresponded with Mrs. Lamberti include Rosario Dawson, George Lopez, Jennifer Love Hewitt and Khloe Kardashian. Mrs. Lamberti exchanges messages on Twitter with some of the players on the New York Knicks. Nate Robinson of the Golden State Warriors sent her free tickets when the team was playing the New Jersey Nets at the Meadowlands and met her after the game.