“HEARD•NY” is a live performance art project by CreativeTime and MTA Arts for Transit which brings a herd of 30 dancing raffia horses by Nick Cave to the Vanderbilt Hall of New York’s Grand Central Terminal twice daily (11 AM and 2 PM) from March 25 to 31, 2013. While the horses will be on display during the day, student performers from The Ailey School will occupy the horses for dance “crossings” which were choreographed by Chicago-based William Gill. Harpists Shelley Burgon and Mary Lattimore and percussionists Robert Levin and Junior Wedderburn provide musical accompaniment to the crossings. The project is part of Grand Central’s 100th anniversary celebration. Gothamist has photos and a video.

…In the frantic pace of our contemporary age, in the monumental machine that is Grand Central Terminal, we are temporarily placed outside ourselves by crossing paths with Cave’s creations. We can observe these horses in the same way that we look upon our fellow travelers in the Main Concourse, sensing the texture of time and the dizzying visual seduction that is the pleasure and bewilderment of our contemporary moment. 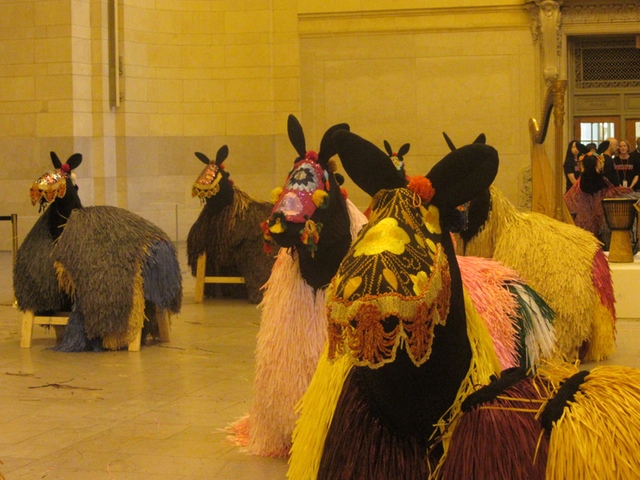 photo by Anne Saunders for Gothamist