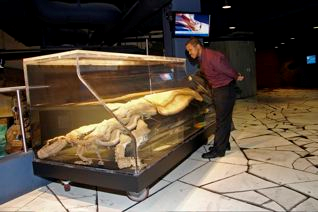 The giant squid was discovered dead on a beach at the Plum Island National Wildlife Refuge in Mass., north of Boston, in 1980. Its long feeding tentacles were missing, and most of the tips of its arms were broken off. But otherwise, the specimen was in good condition. After being examined, it was determined that while alive, the animal was maroon in color, nearly 30 feet long and weighed approximately 450 pounds. It is now cased in a specially constructed nine-foot-long wood and fiber glass container, covered with a plastic window.

Thanks to Widgett Walls for the tip!