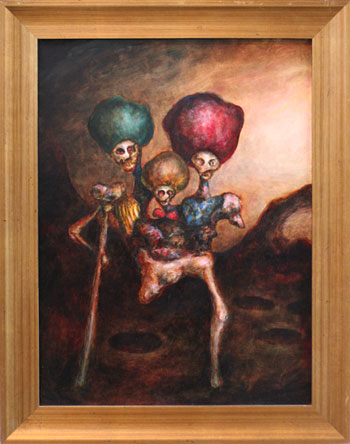 The eerie and surreal art of Frank Garvey is being featured in a solo show titled “Children’s Crusade” at Varnish Fine Art in San Francisco. His work is on display now through October 29th and includes paintings, kinetic sculptures and robots. The opening reception is this Saturday, October 1st from 7-11pm and on Saturday, October 29th, there will be closing party featuring a performance by Frank Garvey and Omni Circus.

Frank Garvey’s solo show of paintings and robots Children’s Crusade is a hallucinatory take on a dark, industrial landscape. Working with projected animation, music, robotics, painting and kinetic sculpture, Garvey conjures up an acrid, musee mechanique-like atmosphere, to create what he calls, “A beautiful journey through the twisted undermind of the urban American landscape.” Garvey filters a defiant political POV that leans toward the stance of the manifesto, through a conglomeration of pop cultural artifacts that appear to be destined for some fort of toxic metal cabaret.

Here are a few photos of Frank’s show that I shot yesterday at Varnish.