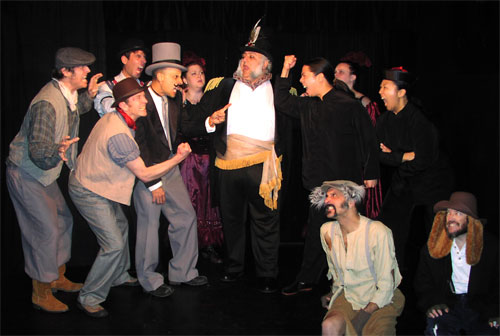 Impossible Productions, the folks who brought you “Batman!!! The TV Show: The Play”, “Zippy The Pinhead in Fun: The Concept”, “Twilight Zone: The Plays” and many other great theatrical productions, are back at it again, this time with “Emperor Norton: A New Musical”. The focus of this play is the notorious Joshua Abraham Norton aka Emperor Norton I, San Francisco’s original eccentric from the Gold Rush era. It opens tonight, December 2nd and runs through January 29th at The Dark Room in San Francisco.

“Pause, Traveler, and be grateful to Norton I” reads the inscription on the Bay Bridge. Emperor Norton I, Sovereign Ruler of the United States and Protector of Mexico, was a visionary to some, a kook to others and beloved by all. Lovingly crafted by the Ohanneson family, this humorous, original musical is a tribute to San Francisco, the Barbary Coast, and its eccentric characters. It’s a step back into history and follows a man who loved his city and the city that loved him. Apparently, beggars CAN be choosers.