We posted recently about Theodor Geisel’s advertising work in the early 1940s. But the artist better known as Dr. Seuss also made art while serving as a captain in the U.S. Army during World War II. He worked on training films and informative documents like this pamphlet to educate GIs about malaria, which features the Anopheles Mosquito, entitled “This is Ann … she drinks blood!”.

Some of the art and content of the pamphlet were also used in a November 8, 1943 Department of War “Newsmap”: 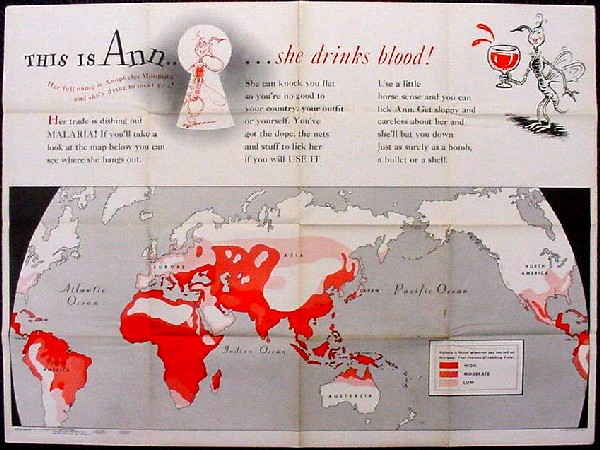 The WWII newsmaps are fascinating documents…

Newsmaps were published by the Special Service Division, Army Service Forces, War Department. The issues were prepared and distributed by the Army Orientation Course. One standard feature that appears on all maps is a short textual summary of key events titled “The War Fronts,” that includes descriptions of war-related events, mostly by geographic area, such as China, Russia, Tunisia, South Pacific, Aleutians, Wake, etc.

Newsmaps were produced each Monday from 1942-1946 and usually featured a map of the current war fronts on one side and a poster about a war-related topic on the other. They were distributed by the Army and Navy to primarily military installations and government & civilian groups working on War Department projects.

Some newsmap posters featured photos and covered topics like “Iran, rich land poor land” (1946) or “The atomic question” (1945). Others featured artists (typically uncredited) illustrating subjects like “Gas” (1943) or the “Merrie Melodies” styled “A Mournful Melody (A Dud Dood It Again – And Watch Out for Booby Traps)” (1943). 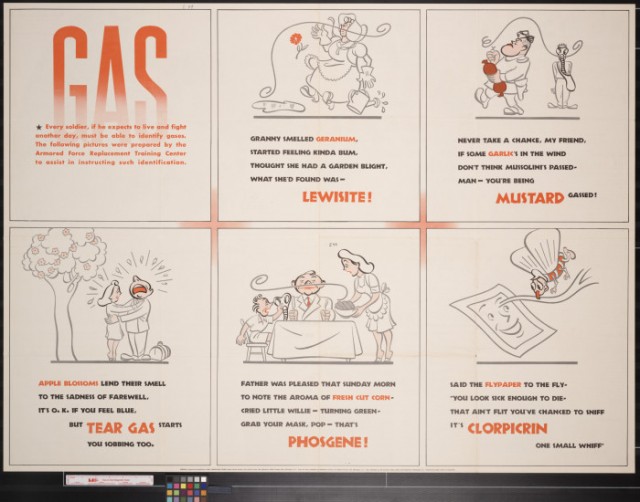 via the infectious disease history blog Contagions and NPR.