After selling out last year, Burning Man organizers decided to launch a new lottery system for distributing tickets for the event. Unfortunately, many longtime event-goers did not secure tickets through the new system and the belief is that professional scalpers hold the majority of them. Organizers have responded to the situation and have implemented a “directed ticket solution” to get tickets into the right hands. In a humorous response to this ongoing story, Burning Man participant Stefan Pildes at GrooveHoops has put together a video and website promoting Crazy Bernie’s FreeBurningManTickets.com, an entity that is headed by a fictional and very exuberant scalper named (“Crazy”) Bernie Mann. The site appears to actually be giving tickets away and now, they have opened an online retail shop that is selling All Access Panties and other “Crazy Bernie” branded items. They also run the “Burning Man Tickets Debacle 2012” blog.

That’s right, We’re so overstocked on Burning Man Tickets that now Crazy Bernie is Giving Them AWAY!!! 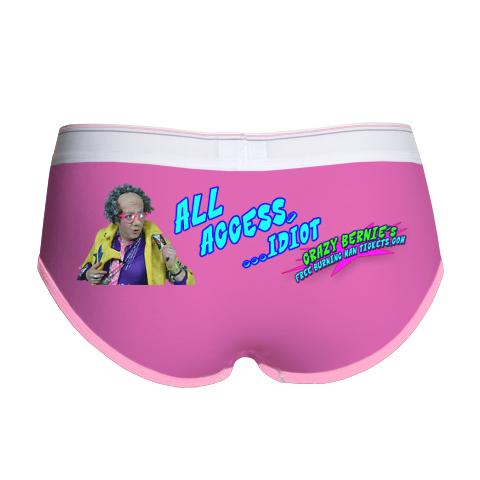 Look, Your Showing It Off Anyway, Might As Well Let It Get You INTO some Trouble!