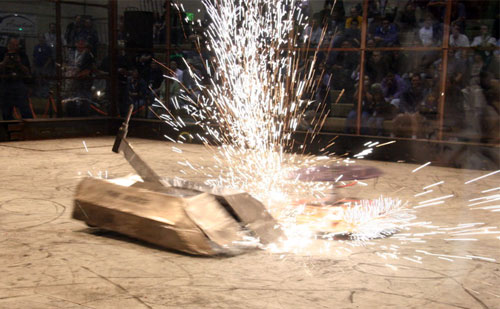 The ComBots Cup and Robot Fighting League’s 2005 National Championships takes place this weekend at Ft. Mason’s Festival Pavilion in San Francisco. Come out and see all the fighting robot action on Saturday, November 12th and Sunday, November 13th from noon to 10pm each day.

The best flame-throwing, high-energy, steel-crunching robots in the world come to SF for the championship after touring the US racking up enough points to compete for the $10,000 grand prize. Biohazard, Sewer Snake, Megabyte, and other famous bots weighing up to 340 pounds will spew fire, flip their opponents, and spin hundred-pound weapons faster than Bruce Lee on meth.

Sideshow entertainment includes the Beer-Can Can-can girls dancing on the sidelines, Flash the Bartender and his flame-throwing 240cc drink blender, and music from Bay-Area indy bands to complement the show.

Here are some photos I shot at RoboGames 2005 back in March which featured a bunch of combat robots.

photo from RoboGames 2005 by Scott Beale