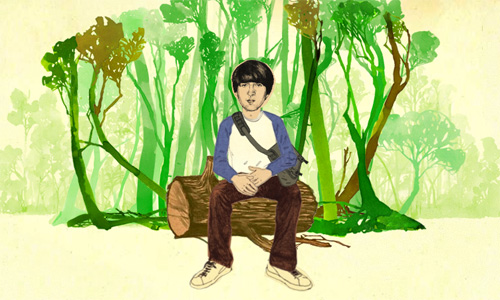 Clearification, staring New York comedian Demetri Martin, is a clever 6 part online video series that is essentially an viral marketing campaign for Microsoft’s new operating system, Windows Vista. The interactive website features wonderful artwork by Michael Gillette and the the videos are kind of like a Wes Anderson film, mixed with Eternal Sunshine of the Spotless Mind and Napoleon Dynamite.

This is by far the most humorous and well executed thing I have ever seen come out of Microsoft.

UPDATE: Tracy Feldstein has just informed me that the hamster wheel feature in episode #4 was the same one that Tracy and Don built last year to power The Disgusting Spectacle. Tracy writes:

When they hired us to do it, we had NO IDEA what it was. We just thought it would be a good experience for the teens to work on a commercial shoot. (and we joked about our “art” being in the De Young museum for an hour.)

They told us that it was a commercial for a computer company….