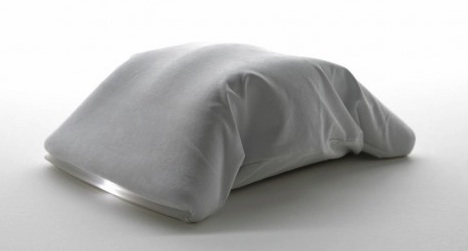 The Fukitorimushi, which roughly translates to “wipe-up bug,” is an autonomous cleaning bot that crawls around and cleans your floors. Unlike the Roomba, which gracefully glides across surfaces, the Fukitorimushi has a distinct inch-worm-esque crawl that drags its belly across your floor.

The robot’s features include a space-age nano-fiber called Nanofront that is especially absorbent of liquids and particles. As such, its debut was not at a robot fair, but rather than the Tokyo Fiber Senseware Expo. While the fiber may be the technological break though, the robotics are rather excellent as well. The bot can sense a distinctly dirty patches and will then take extra care to clean the offending areas before returning to its charger. And it is cute, too!

According to its creators, Fukitorimushi is also designed to engage the emotions and foster a closer relationship between humans and machines. The way the machine creeps across the floor may seem a little strange at first, but the designers say people tend to grow fond of the robotic creature after watching it for a while. In addition, the owner must periodically replace Fukitorimushi’s nanocloth cover with a clean one. The designers suggest this task of looking after the Fukitorimushi may encourage a pet-like affection for the machine.

The Fukitorimushi is merely a proof-of-concept bot right now, and it is unclear if there are plans for consumer release.