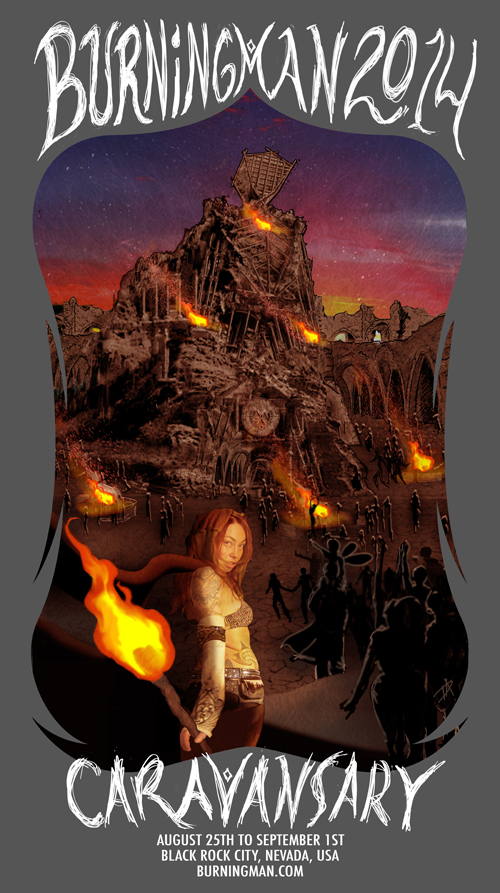 Burning Man has announced the art theme for the 2014 festival: Caravansary. The theme refers to the ancient roadside inns, or caravansaries, that lined the Silk Road trade routes in Southeastern Europe, North Africa, and Asia. Caravansaries were desert oases and marketplaces for both goods and the exchange of ideas—all themes that will be reflected in the 2014 event. Burning Man 2014 will take place August 25 to September 1 in Nevada’s Black Rock Desert.

This year we will create a caravansary that occupies the crossroads of a dreamland: a bazaar of the bizarre wherein treasures of every sort, from every land and age, flow in and out to be flaunted, lost, exploited and discovered. This is not a tourist destination, but a home for travelers who come here bearing gifts. Amid the twisting and the turnings of its souk, participants will come upon an inexhaustible array of teeming goods and unexpected services. Anyone may pose as ‘merchant’ here, and anyone may play a ‘customer’, but nothing in this strange emporium shall have a purchase price — no quid, no pro, no quo — no trade at all will be allowed in this ambiguous arcade. According to a rule of desert hospitality, the only thing of value in this ‘marketplace’ will be one’s interaction with a fellow human being.