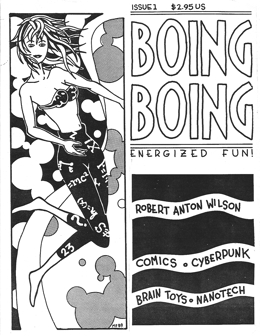 Mark Frauenfelder just uploaded the first issue of Boing Boing from 1989, back when it was a zine, which then morphed into a magazine, later going online in 1998 and finally becoming a blog in 2000. In this first issue you can see the beginnings of many familiar Boing Boing topics like technology, comics, cyberpunk, etc. It’s available for download as a 16MB PDF.

Here’s an early holiday present: a scan of the entire first issue of bOING bOING, the print zine that preceded Boing Boing, the blog. I think most BB readers don’t know that we started as a zine. Our first issue was printed in 1989, and only 100 copies were made. Now, 16 years later, I doubt more than 10 copies remain on the face of the Earth.