As a play on Discovery Channel’s Shark Week (and because they don’t have a big budget), internet TV network Revision3 created “Animals Acting Like Sharks Week”, a funny low budget video full of cute critters acting like and dressed up like sharks.

It’s everything you could ever want in a video: adorable kittens and puppies with a bit of danger mixed in.

Shark Week Attacks Revision3 And Philip DeFranco!: In honor of Shark Week, all your favorite Revision3 shows will be celebrating sharks in gaming, tech, entertainment and more. Our own Philip DeFranco will be hosting Shark Week’s 25 Best Bites on the Discovery Channel on August 16th to count down the top 25 most thrilling and chilling moments since Shark Week first launched in 1988! Each night, Philly D. and the Shark Week team will be taking your votes on what Chompie, the giant robotic Sharkzilla, will crush with his massive hydraulic jaws. 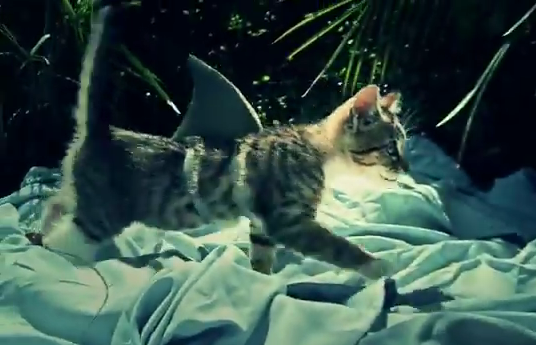