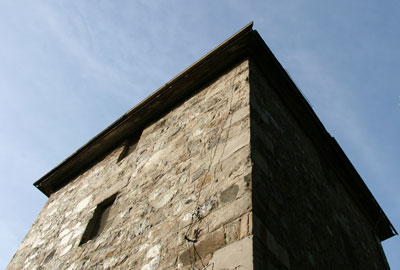 Previously I had mentioned that the San Francisco’s legendary Albion Castle was for sale. Here are a few updates:

2) Former castle resident Paul de Jong recently launched albioncastle.us which has some historical information and photos of The Albion Castle.

3) On Monday, May 23rd The San Francisco Examiner published an article on The Albion Castle written by Justin Jouvena: “Finally, a home fit for a king in San Francisco”. This article mentions a “modern kitchen”. Lori wants to know how a 70’s style kitchen, which appears to been put together from Home Depot, can be considered modern. Then again, I guess that it is modern compared to a 135 year-old castle.

4) An auction pamphlet was mailed out that conveniently failed to mention that The Albion Castle is located in Hunter’s Point, right under the projects. Here’s how they describe it:

“Albion Castle, located directly in the center of the up and coming waterfront community of Inda Basin, has excellent potential for the creative buyer”.

Wow, now that’s some imaginative marketing hype. If you really want to know about the neighborhood, I would suggest renting the excellent documentary Straight Outta Hunters Point by Kevin Epps.

UPDATE: The Albion Castle sold for 2.1 million and the new owner plans on turning it back into a brewery, bottling water from the natural springs and eventually opening up a restaurant. The San Francisco Examiner has the full story.