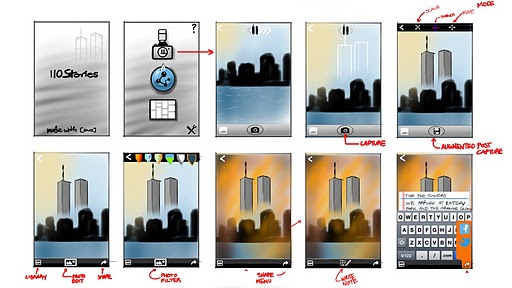 110 Stories by Brian August is an augmented reality iPhone app, currently under development, that will insert ghostly silhouettes of the World Trade Center towers when Ground Zero is viewed with the phone’s camera. Users will be able to upload tower composite photos to the app’s website, and anyone will be able to view the photos by selecting them from an interactive map. In the second phase of the project, 110 twin tower silhouette sculpture installations will be placed in vantage points around the city to provide a physical version of the same effect.

August is developing the app in conjunction with design studio [zero] innovates. He’s raising money for the project on Kickstarter.

I’m Brian August, and I’ve been obsessed with 110 Stories for almost 10 years. When I started thinking about the idea, Augmented Reality didn’t exist, nor did iPhones. But they both do now, and I’ve assembled a talented team to build the 110 Stories Augmented Reality iPhone App and launch it by the beginning of September. I’m asking for your help to make my obsession a reality. Every penny I am raising will be used to design, build and launch the app. The app will be FREE. The project itself is not intended to make a profit.