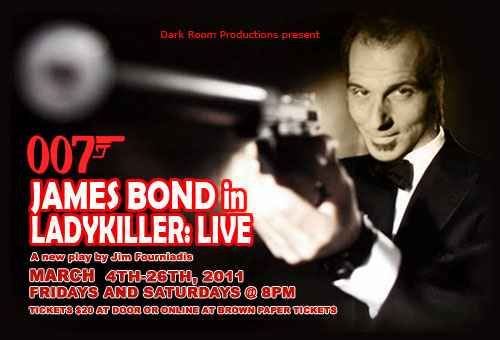 When Ladykiller: Live debuts in March, The Dark Room Theater can put another impressive notch in its gigantic cultural icon belt. Agent 007, aka James Bond, joins the ranks of Batman, Luke Skywalker, Zippy, Groucho, Frankenstein, Rod, and God, all of whom have appeared on the diminutive stage of San Francisco’s best dive theater at one time or another. God “appeared” as a disembodied voice, technically speaking, but you take what you can get.

The Dark Room specializes in transposing works of cinema, television and sometimes literature, into nearly-no-budget small-surface-area live theater. Ingenuity is their secret weapon (from staging to costume to sound effects). And surprise. And an almost fanatical devotion to the comic muse (that’s Thalia, if you’re keeping score at home).

007 in his oddest assignment yet…

We here at The Dark Room have created an all-new Bond adventure, one that Sir Ian Fleming himself could not write—mostly because he’s been dead for decades.

See: James Bond wrestle with gypsies!
Travel: To exotic locations, and even ski!
All: On our tiny stage!

Ladykiller: Live plays every Friday and Saturday in March at 8pm at The Dark Room’s well-disclosed Mission District location. Tickets are on sale now.

In the video trailer, Bond, played by Steffanos X (lead singer of the Tom Jonesing tribute band), croons the original tune “More than a Man” composed by playwright/director Jim Fourniadis.