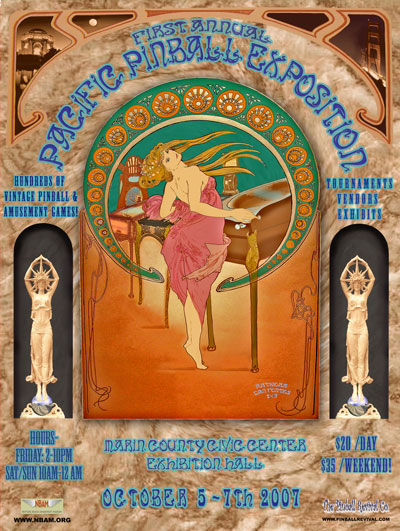 Neptune Beach Amusement Museum (Alameda) and the Pinball Revival Company (Novato) have joined forces to present the first annual Pacific Pinball Exposition, which takes place October 5th-7th at the Marin County Civic Center Exhibit Hall in San Rafael. Here is a list of pinball games that will be represented at the expo.

This show is a new direction for pinball shows. It features hundreds of vintage machines and amusement devices from the 1930â€™s to 2007 highlighting their historical and cultural significance and honoring their impact on America. With an emphasis on vintage machines, we have a smorgasbord of rare games and a healthy stable of modern pins that are all ready for play. The Pacific Pinball Exhibition will feature exhibits on the History of Pinball, the Science and Physics of Pinball, the Evolution of the game and its mechanisms. Special presentations will be offered on the Artists and the process of screening and designing the artwork, circuitry design and logic, and, of course, the secrets of Pinball Wizardry, all in the beautiful setting of the world famous Marin Civic Center in the San Francisco Bay Area. Proceeds from this event go to the Neptune Beach Amusement Museum, a 501 c 3 Non Profit focused on creating a Museum for pinball and amusement machines. This project started as most do; out of necessity. I was teaching classes in Interactive Kinetic Art (pinball) and I had a need to show students what was happening inside the machine while it was running. It was difficult to prop the playfield up and trigger various switches on the playfield to simulate play. I first thought a clear window on the side would be nice but it seemed so â€œhackedâ€ I then thought of making a clear playfield and then the idea of a totally see through machine hit me. That way you could see the mechanical board and the scoring in the head.

Here are some photos of the Visible Pinball Machine by Greg Maletic.