At long last the legacy of The Committee, an improvisational comedy troupe based in San Francisco in the 1960’s, is getting deserved attention. Exactly fifty years after they formed (and forty years after breaking up) the documentary The Committee: A Secret History of American Comedy is in production. It chronicles the group’s groundbreaking comedy improv and the political focus that set them apart from their more famous sibling Second City.

Chicago’s Second City Theatre opened in 1959, and has justifiably been recognized as a catalyst of modern American comedy; their influence can be seen in the original Saturday Night Live cast, and in shows like SCTV, Cheers, 30 Rock and Parks and Recreation. The Committee Theatre was founded in 1963 in San Francisco by several Second City members who came for a summer and stayed a decade. They included Del Close who would become a legendary improv teacher credited by Bill Murray, Mike Meyers, Tina Fey and many others as a kind of comedy guru.

Famous Committee alumnae include Rob Reiner, Howard Hesseman (WKRP in Cincinnati, Head of the Class), Larry Hankin (Friends, Breaking Bad), and future cast members of M*A*S*H, The Bob Newhart show, NYPD Blue, as well as Gary Austin who founded LA’s Groundlings and Carl Gottlieb who co-wrote Jaws & The Jerk. Members of the troupe, including Reiner, joined The Smothers Brothers Comedy Hour as writers and cast in 1968, helping win an Emmy for the show while also getting cancelled over epic battles with the network’s censors over content. 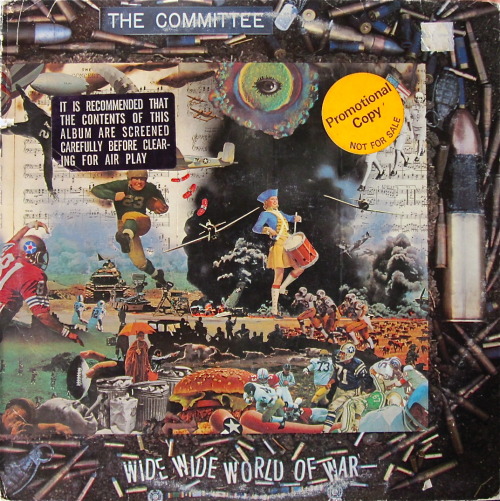 The cover of The Committee’s 1973 album Wide World of War.

Like Second City their innovative sketch comedy was built on improvisation, and in fact Del Close and The Committee invented what is now one of the most widely used improv techniques “The Harold“, a series of improvised stories and scenes which is the signature form of the Upright Citizens Brigade and many other troupes around the world.

The Committee performed nightly in San Francisco and around the country for years and are cited as major influences by everyone from Tommy Chong to Harry Shearer. But little evidence of their ephemeral improvisational art remains. Some 1968 recordings have emerged and a few clips on YouTube, but these barely scratch the surface.

The San Francisco Improv Festival, who recently organized a 50th anniversary reunion for The Committee, have a current Kickstarter campaign to support the film. They hope to uncover missing links in comedy’s evolution with new interviews of more than a dozen former Committee members including Hankin, Hesseman, Gottlieb, and founder Alan Myerson. From the film’s co-director, Jamie Wright:

When we look back on the course of modern comedy, much of the story of how we got where we are is the story of improvisation. Most of the casts & writers of SNL, 30 Rock, and most of our favorite comedy shows and movies are full of improvisors who cut their teeth in the tradition that The Committee helped form. In their early use of drug humor, the portrayal of openly gay characters on stage, and their relentless pursuit of political & social satire, The Committee both pushed boundaries and broke new ground for comedians who came after as well as birthing the forms that many of today’s improvisors train in.