After delays and mechanical problems that cancelled the December 4, 2014 launch attempt, NASA has successfully launched the next-generation Orion spacecraft into orbit at 7:05 AM ET on December 5, 2014. Video of the launch shows the spacecraft lifting off on board a United Launch Alliance Delta IV Heavy rocket from Cape Canaveral, Florida. Orion is expected to splashdown somewhere in the Pacific Ocean after a four-and-a-half-hour flight.

NASA’s Orion spacecraft launched successfully atop a United Launch Alliance Delta IV Heavy rocket Dec. 5 at 7:05 a.m. EST from Space Launch Complex 37 at Cape Canaveral Air Force Station in Florida. Orion’s Exploration Flight Test-1 (EFT-1), is the first flight test for NASA’s new deep space capsule and is a critical step on NASA’s journey to Mars. The 4.5 hour flight is scheduled to conclude with the splashdown of Orion in the Pacific Ocean.

#Orion's test is a critical step on our #JourneyToMars. Learn more about how we'll get there: http://t.co/uBW9mDoTss pic.twitter.com/bsZi0MQnEj

Orion is designed to be a long-range spacecraft that could take astronauts to destinations farther from Earth than ever before to destinations like asteroids and eventually Mars. It is also a return to human spaceflight originating from the United States, which has not been a part of NASA operations since the space shuttle program ended in 2011. Since that time, NASA has relied on the Russian Soyuz program to get American astronauts to and from the International Space Station. 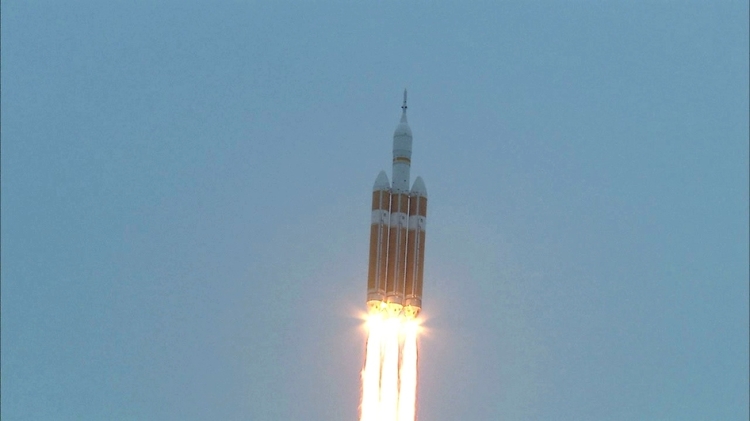