One last post to cap our coverage of the great San Francisco snow controversy of 2011. It has been widely quoted that this was the first snow in San Francisco since 1976, but we have a few pieces of evidence that there has been tons, literally, of the cold white stuff in SF between now and then–some in the air and some on the streets.

Notably there was a very localized snow event in the middle of San Francisco in August of 2005. Two-hundred tons to be precise, enough to make Norwegians smile, covered a couple blocks of Fillmore Street to celebrate US Olympic skier Jonny Moseley‘s 30th birthday. He and his friends decided to produce a surreal summertime ski and snowboard jump event called ICER AIR in the midst of the tony Pacific Heights neighborhood.

It was controversial and sparked neighborhood outrage, but then-Mayor Gavin Newsom was willing and the event was approved. By all accounts, it was a blast, dude. Jumpers launched from one of those fake San Francisco trolleys, Frank Chu even showed up. But the SF street hassle was apparently more than the producers wanted to deal with again. The event was produced three more times in San Francisco, but after that year it was held in the AT&T Park baseball stadium. 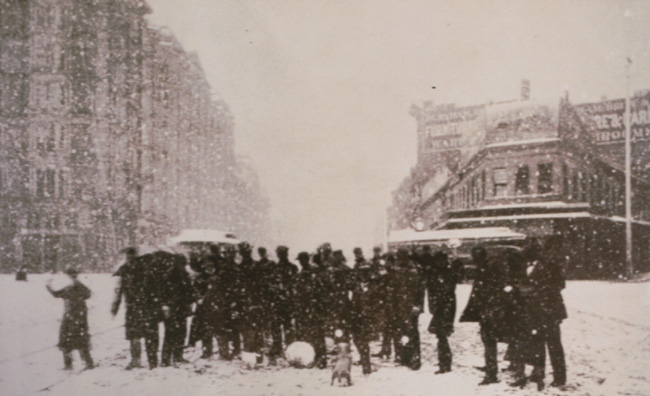 Golden Gate Weather Services lists a total of 11 days with snow of .1 inches or more from 1856-1976. TheStormKing.com has a great article on the history of snow in San Francisco including the image above from 1882.

More modestly, this video shot near Golden Gate Park shows what certainly looks to me, and numerous on-camera bystanders, like snow back in 1999. I don’t think the fact that it seems to have been shot outside a bar in the middle of the day should at all take away from the visual evidence that it offers.

Whatever it was (and however much of it) that fell in 2011 was not recognized as snow by the official flake-counters at the National Weather Service. Though they did confirm that the city matched a record low temperature for the day.

If you feel this whole precipitation definition stuff is unjust and poorly handled, you can go from weather crank to certified weather witness with training by SKYWARN a volunteer program with nearly 290,000 trained severe weather spotters run by NWS.