If you are still wondering if it snowed in San Francisco, you are not alone. Last night Michael Cuffe of Warholian shot video which would seem to be definitive proof that it did snow in San Francisco. And yet controversy rages on.

Reports surfaced late Friday on the main sites tracking this story isitsnowinginsanfrancisco.com & isitsnowinginsfyet.com that, yes, we had flake. Local TV station KTVU has video. And The New York Times covered it, too:

Predictions had called for the possibility of the first significant snowfall in San Francisco since February 1976, when all of an inch fell, according to the National Weather Service. And just before midnight, several high-lying city neighborhoods, including Twin Peaks, at some 900 feet, reported light snowfall.

But in the morning The San Francisco Chronicle (which is some kind of “paper”?) reported “Record cold weather but no snow day for S.F.” and MSNBC.com also dumped rain on the snow parade:

No snow was observed in downtown San Francisco and AccuWeather.com meteorologist Dave Samuhel said the dusting would not count toward official records that show the last measurable snowfall in the area 35 years ago.

Don’t tell that to the cranks & madmen (aka our friends) who frequent the short-word-burst service known as Twitter:

The Twitterature is all a-flurry with talk of potential snow in Frisco-town, for details follow the trending topic #snowsf where the likes of @Mike_FTW are fomenting a revolt against reality with tweets about blizzard conditions in the Bay Area that, while often very funny, are in no way true. 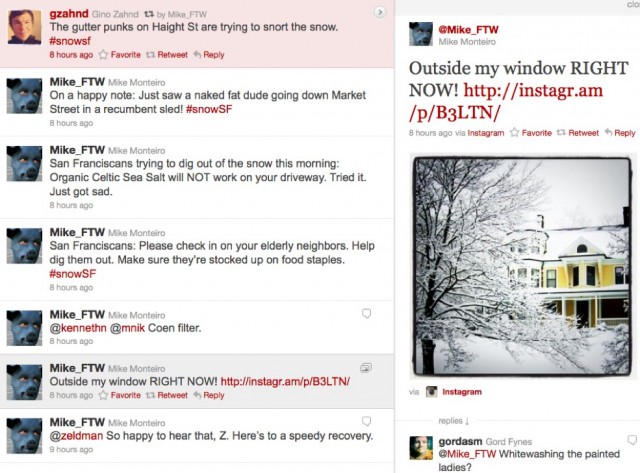 The bottom line? Even if “technically” we didn’t rock Mohs Snowness Scale, some frozen white stuff appeared, but not that much. None of it stuck. Nobody sledded. Nothing to ski here, folks, just keep moving.