History will show that on March 5th, 2013 San Francisco’s reliably temperamental weather patterns greeted the debut of The Bay Lights public art project with a brief rainstorm. Which is wholly appropriate. San Francisco is not a fair weather city, so any art planning to last years on the the San Francisco–Oakland Bay Bridge better be designed to handle the elements.

The rain lasted a few hours, just long enough to frame the official ceremony featuring San Francisco Mayor Ed Lee and (former mayor) California Lieutenant Governor Gavin Newsom. Undeterred, at 9pm Pacific time they flipped the switch (err, pushed the laptop key) to boot up the 25,000 LED lights that comprise Leo Villareal‘s monumental public art piece. San Franciscans gathered along the piers north of the bridge and in numerous suggested viewing spots to see the first burst of LED white and the steadily evolving patterns that followed. It will turn on at dusk daily for 2 years.

Bay Lights is installed on the north side of the western span of the bridge (attached with 60,000 zip ties) between San Francisco and Yerba Buena Island. The project has been privately funded, and is still raising the final quarter of their $8 Million goal. It is estimated the lights will use only $30 of electricity a day or $11,000 over 2 years. 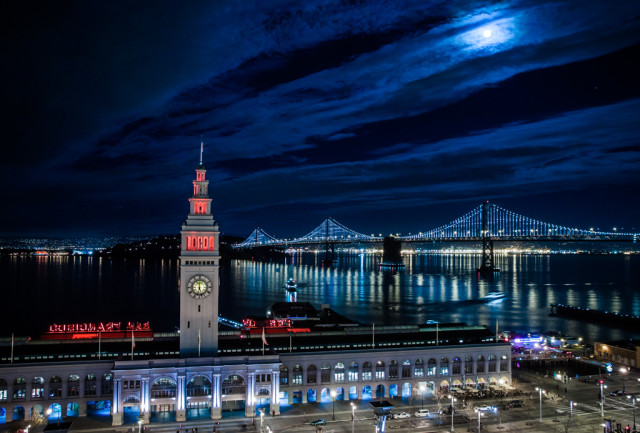 Artist Leo Villareal drew on his background in sculpture and computer programming for both the installation design and the algorithmically-generated dynamic light patterns. He cited the monumental works of Christo and Jeanne-Claude and the generative art works of Brian Eno amongst his influences as well as his time attending the Burning Man festival in the 1990’s where he also programmed his first light sculpture. 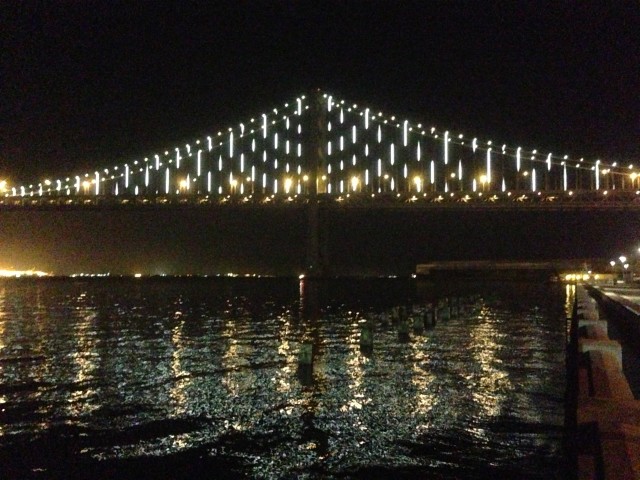 At a press conference earlier in the day Mayor Lee said he could see the current two-year permit being extended for some time. San Francisco has a habit of extending public art beyond its initial sunset date–the Defenestration building was expected to be up less than a year and after a recent renovation has been there 15 years.

We first covered The Bay Lights in 2011 and last featured it about a month ago. Here’s a timelapse video featuring the changing patterns of Bay Lights in action, seen over San Francisco’s Market Street from a test around that time:

At one point within the first hour the lights were on, Bay Lights’ evolving constellation of white LEDs was augmented by a cluster of moving red and blue lights. No, it wasn’t a patriotic American display, just a pair of SFPD cars that had some urgent business on the bridge. It just goes to show that unpredictable elements will always turn up in public art.

You can tune into a live feed of the Bay Lights at any time. Hint: nothing really happens until it’s dark.