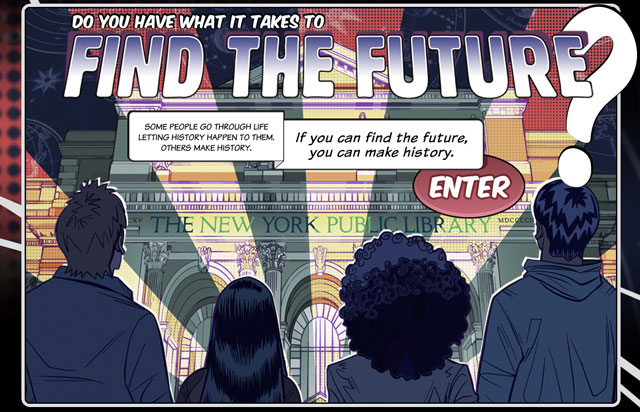 Find the Future at NYPL is an augmented reality game by Jane McGonigal that celebrates the 100th birthday of the New York Public Library’s landmark Stephen A. Schwarzman building (see the trailer). Players are asked to solve quests inspired by historical artifacts hidden within the library building. The initial stage of the game is occurring online as players register and solve their first quest. The main event will be on May 20th, when 500 players are invited to spend the night at the library, solve 100 quests, and create a book based upon their revelations that will remain in the library’s permanent collection. On the following day the game will be available to library patrons and anyone with an internet connection.

Find The Future at NYPL brings visitors to the Library together with players around the world to tap into the creative power of the Library’s collections.

It is first game in the world in which winning the game means writing a book together – a collection of 100 ways to make history and change the future, inspired by 100 of the most intriguing works of the past.

We’ve posted previously about the remarkable work of augmented reality game designer and researcher Jane McGonigal, most recently regarding her book Reality Is Broken: Why Games Make Us Better and How They Can Change the World

See Also:
– CryptoZoo, A Game About Inventing the Culture of Physical Activity Comes To San Francisco